Despite the tedious about of red tape involved with managing a municipality’s social media, the City of Hamilton provides an excellent example of creativity that sparks engagement from key residents.

Since the mid-2000s, the City of Hamilton has been running a promotion for residents who are recycling superstars. These promotional yellow recycling boxes, otherwise known as Gold Boxes, are reserved for residents who correctly sort organics, paper, aluminum, glass, and plastic – while still only using one bag of garbage or less. A City of Hamilton employee completes a curbside audit, checking for a number of things, and chooses to reward the resident with a Gold Box.

While the program has been around for several years, maintains a website, and a now defunct BlueBox Man Facebook Page it may have received one of the best promotions this past week via social media.

City of Hamilton residents need to sign-up for their chance to win a Gold Box. Of the residents who sign-up, the City of Hamilton worker randomly selects households from which to audit… and I bet they “Never thought that this would happen.”

This past week, one of the Gold Box winners was a musician from the Arkells, a super amazing band that hails from Hamilton.

Clearly excited that his ninja recycling skills had been recognized, he posted a photo of his newly acquired Gold Box to the Arkells’ Instagram feed, which also was shared with the @ArkellsMusic Twitter account. 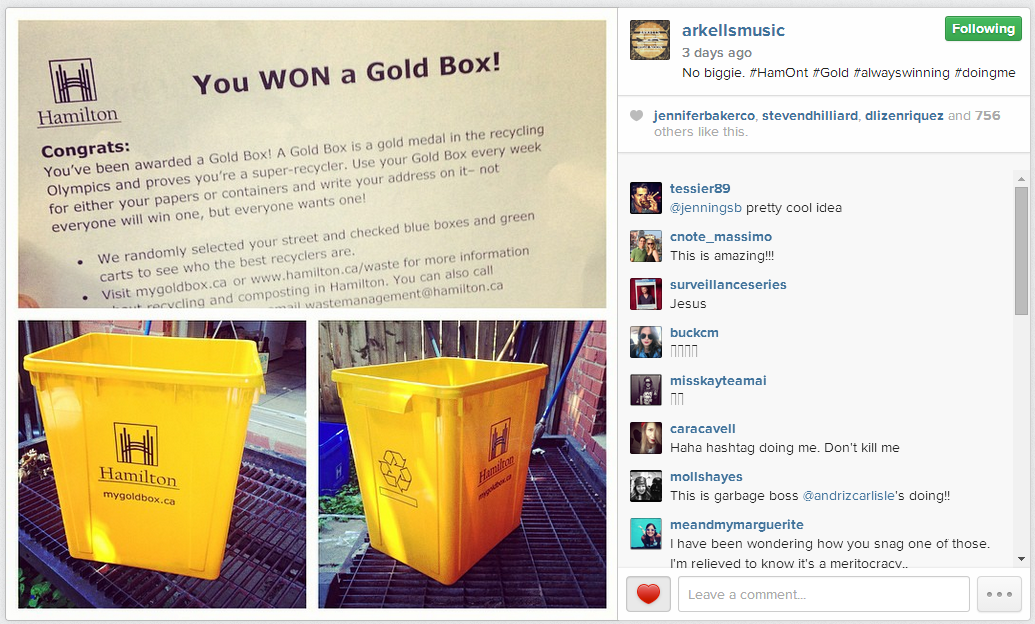 You think it couldn’t get any better: tonnes of free promotion for the program; and, a conversation with residents about saving the planet. Then it does.

The City of Hamilton gets a gold star for this response:

Why is this response so great?

1. LISTENING: Despite not being officially mentioned, the City of Hamilton was listening to what was being said about their program and key hashtags. By doing this they were able to engage with the Arkells about their Gold Box excitement.

2. RELEVANT & CHEEKY: The City of Hamilton’s tweet includes information about the recycling program: “Be sure to place it at curbside and not #HighNoon,” while at the same time giving a nod to the Arkells’ upcoming album High Noon. 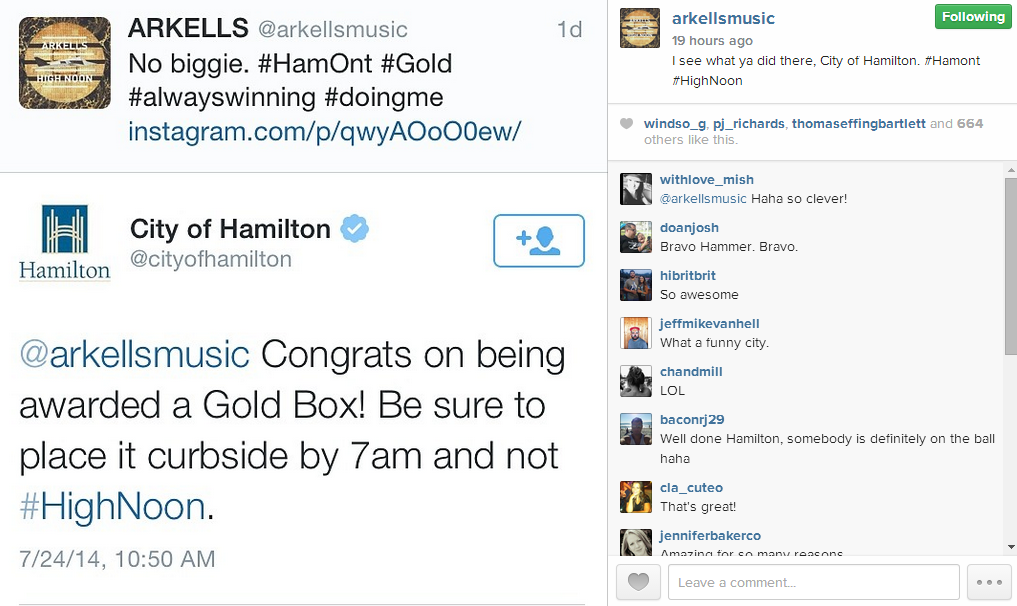 While municipalities do face many political constraints, it can be beneficial to allow the folks who handle social media a bit of leeway to engage with residents. You never know what conversations may “Come to light” when you do. 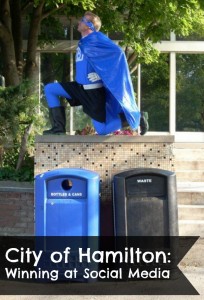 Having invested the last eight consecutive Mondays from 8:00pm-10:00pm with ABC’s The Bachelorette, I’ve decided to do some social media research on the remaining bachelors.

Based on Twitter profiles alone, I believe the finalist will be Chris Soules (@C_Soules).

(1) Either Chris isn’t telling us something, (2) he’s ACTUALLY a social media marketer and not a farmer, or (3) someone is managing his account. 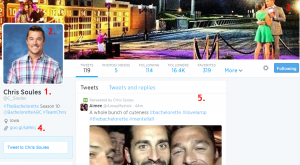 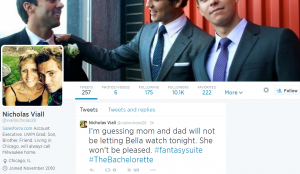 I am positive there is a clause in The Bachelorette contract regarding social media during and following the taping of the show. That said, Chris’ doesn’t seem like the Twittering-type, yet he does it in such a timely and professional manner. THIS is the reason that I think he’s the winner.

This past week, while I was on vacation with my husband, I was reminded that social media doesn’t have to be complicated.

During our time off we visited Konzelmann Winery, one of my favourite wineries in Niagara-on-the-Lake, Ontario. The winery is situated on the southern shores of Lake Ontario overlooking the lake. Konzelmann recently completed renovations on their property, which included the construction of an elevated viewing platform that overlooks both the vineyards and the lake.

While on this viewing platform, visitors, myself included, take pictures of the vineyards, the lake, the view of Toronto… and of themselves (aka Selfies).

During this visit I noticed that the viewing platform included a simple sign that said: “Don’t be selfie-conscious. Share with us. #Konzelmann.” 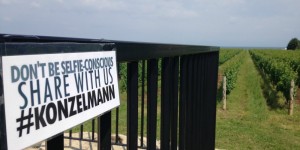 Konzelmann clearly understands what its visitors are doing on their property: they are taking photos of themselves from the viewing platform. With this observation in mind, Konzelmann created a sign that would prompt to visitors to tag Konzelmann winery using #Konzelmann when uploading selfies to Twitter or Instagram.

Benefit to the Business

Once a visitor uses the hashtag #Konzelman on either Instagram or Twitter, it is simple for the winery to track interaction and engagement.

First, Konzelmann can track the organic number of photo uploads to Instagram, as well as Twitter tweets. This is measurable, and can be recorded and compared with weekly and monthly statistics. More important, however, Konzelmann can easily engage with users who upload photos. This additional level of interaction will further develop Konzelmann’s brand with its customers.

This task has been rated as medium because although creating, printing, and hanging a sign is easy, the difficulty lies in understanding what customers are doing when you may not be watching, as well as the follow through once the photos are uploaded.