Last year I joined Pinterest, a new and uber popular social media image sharing site.  Understanding the importance of individual board descriptions, I ensured each were complete with optimal keywords and phrases highlighting the visual goodies to be found within each.  I also realized that for pins to be searchable, they also need to have appropriate descriptions and key words.

Curious to find an answer to this drastic increase in activity, I ventured to my trust researcher: Google.

Inputting a search query of “New Pinterest Followers,” I land within the Help Section of Pinterest. Here I find an answer to my Pinterest Board Growth:

Well… the mystery is solved. I am happy to hear that these are legitimate accounts and that my Pinterest account has not been compromised. That said, to ensure that my account is used in the Fast Follow, I am continually adding new pins with solid descriptions to my Social Media Training Board.

Has anyone else noticed new followers?

As many of you know, last week I took a much needed vacation. Last year I was lucky enough to win a $1000 travel voucher from a local web development company, Response I.T. Although the prize was branded as a trip to Las Vegas, my husband and I had our hearts set on Chicago. 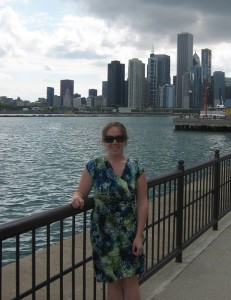 With the goal to disconnect and relax, both of our cell phones were turned off and left in them safely in Canada. We landed in Chicago Monday afternoon and hopped on the subway (aka CTA: Chicago Transit Authority) and headed downtown into the land of social media and social sharing.

I quickly noticed that every advertisement on the internal CTA included a complete listing of the organization’s social media via small logos and URLs. Not surprisingly the most popular platforms were Facebook and Twitter, while close third and fourth were Instagram and Pinterest.

Over the next few days, after visiting several restaurants, I noticed a reoccurring theme. Where restaurants used to keep dessert and drink menus, were small cards that included URLs to the restaurant’s Facebook, Twitter, and Instagram accounts. Rather than encouraging people to splurge on dessert, restaurants were encouraging people to take photos of their food and upload it to the respective social media account. It makes me think: Is social sharing worth more to the restaurant than the impulse $10.00 dessert or $9.00 martini? I suppose it depends on the impact of an individual’s social network.

There was also one restaurant, Elephant and Castle, that encouraged people to include a hashtag (#elephantcastle) when uploading photos from their meal or night out. Although the tag is not overly creative, I can appreciate its clarity. With a quick check to Twitter, I find the hashtag includes tweets from both Elephant & Castle Restaurant as well as National Rail from Great Britain. Despite the advertisements, this tag is not heavily used on Twitter or on Instagram.

My husband and I also went to a Chicago White Sox game, while waiting for the CTA I noticed an advertisement from the baseball club. It included the hashtag #makeanimpact. After returning to Kingston to write this blog, I had to search several times to even remember what the hashtag was. A more intuitive tag would have been #WhiteSox. It makes me ask, “what are they making an impact on?” After checking Twitter, the hashtag has only been used a handful of times by actually White Sox fans – most likely because they can’t recall the newest hashtag. There’s also over 1,200 mentions of the tag on Instagram, but it’s also mixed with inspiration type uploads.

What’s the moral of this wonderful vacation story? First, social media is here to stay. It has permeated our culture and changed how companies market themselves. In fact, most companies want us to do the marketing for them. Remember that people trust one another, and not corporations. You are more likely to believe something a friend has told you, than an ad you saw on the subway. Second, keep your social media simple. Create accounts and tags that people can easily recall, and use in their daily social media use.

Your Twitter archive, however, can go one of two ways: positive or negative.

Remember the time you had too many glasses of wine and made an off-colour, politically-charged comment on Twitter. That’s available.

Or that time you shared an inappropriate joke about a specific ethnicity? That’s also still available.

Concerned? You should be.

More and more politicians, celebrities, and people of authority have been made examples of recently due to their inappropriate comments on Twitter. It seems as though reporters have made it their full-time job to scan Twitter feeds in the hopes of discovering comments that could be made news-worthy.

On the other hand an individual’s Twitter feed can also be used for good.

Twitter users have the opportunity to download their complete Twitter archive as a means of preserving their organization’s history. Although Twitter has only been available for 6 years, in that time many organizations have become daily users of this social media tool, tweeting about trivial details and important workings of their business.

Twitter is a powerful and global social media platform. If you or your business is using Twitter to speak to your target audience, make sure that you have developed a clear social media policy as well as acceptable (and not acceptable) content to be tweeted.

As many of you know I have begun the final class of my Bachelor of Education – Adult Education. The purpose of this course is to allow learners the space in which to critically reflect upon Adult Education in its relation to the world.

Our major assignment is to conduct a literature review about a specific contemporary issue in adult education. The requirements indicate to choose a topic that is important to us as learners. To start this process I wrote down the two things that were important to me (and my business!):

As many of you know, I provide social media training opportunities for businesses and workplaces.

There are several problems that can be derived from these components. Due to rapid technological advances, employees’ skills are not up-to-date. As a result, employees are not as effective or efficient completing their workplace tasks. That being said, however, very few formal educational institutions offer up-to-date technology training opportunities due to the challenge with designing current technology-based curriculum. As a result, employees are unable to update their skills and as a result workplace productivity suffers.

“How does formal education adapt existing curriculum to meet technology-based learning demands of the modern workplace?”

Just the beginning steps to my learning journey for this course…