Many of us have heard the statement, “Trending on Twitter.” If you’re wondering what that

Trends are determined by a fancy (and complicated) Twitter algorithm that identifies popular keywords, phrases, and hashtags that currently being used in tweets.

To find out what is trending on Twitter, visit your homepage and look in the third white box on the left-hand side (see image). These are the current trends for your chosen location. If you would like to change your trend location, click “CHANGE” and choose a location more appropriate to your needs. Note to my Canadian friends: Twitter thinks Canada is comprised of only three cities, including: Vancouver, Toronto, and Montreal. Choose wisely.

Clicking on a trend acts similar to searching a key word or phrase; it will bring up tweets that include the trending word or phrase. If you’re feeling left out and would like to participate in a “trending topic” simply post a tweet and include the hashtag, and/or keywords linked to that trend!

Listen to Your Target Audience. Fred Penner Did!

I was a product of the 80s, which means I grew up watching (and listening) to Canada’s Fred Penner. Naturally the star of CBC’s Fred Penner Place, aired from 1985 to 1997, Fred Penner was a famous (by Canada’s standards) children’s entertainer.

Children, who were born in 1994, are now 18 years-of-age and attending university and college. These are the children who grew up enamored with a man dressed in white jeans and a purple and pink sweater, who always managed to find the special log in the forest through which to crawl to reach the special destination. Polite. Friendly. Musical. Fred Penner had a special place in many children’s hearts.

While reading last week’s Macleans, I was happy to learn that Fred Penner is on tour! Before you get too excited, you won’t find him selling out venues like the Rogers Centre or the Air Canada Centre in Toronto. Rather, he has reconnected with his original target audience from the 1980s and 1990s. Fred Penner has been playing at Canadian universities over the past year belting out classics like “Sandwiches.”

After further inspection of these lyrics, I realize how applicable they are in my own personal life. I could swear that my husband has said these words to me, but perhaps not in lyrical form. “I love sandwiches, I eat them all the time” and “If I had a hundred, I’d eat them all at once.” Yup. Sounds just like him

I think Fred Penner is on to something! For the rest of us, remember your target audience – listen to what they are saying, and develop products and services to cater to their needs.

Do you ever wonder how many people see your brochure, business card, or newspaper 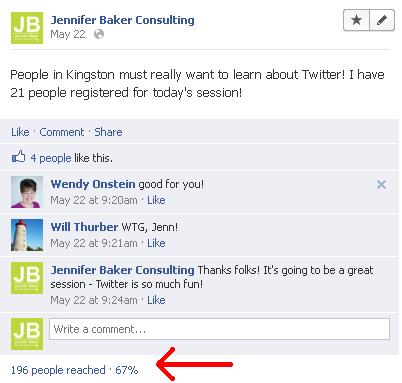 advertisement? While sales representatives from these respective companies can provide you with a general idea of the number of readers, you never know really for sure.

If you’ve implemented social media marketing powerhouse Facebook into your marketing strategy, it will keep track of the number unique people who saw your post.

The number will vary depending on tags used (people and pages), as well as the number of comments received. This feature is only visible to page administrators. I recommend using tags within your posts, and encouraging fans to comment! This will help expand your reach.

We all know it… business owners are pressed for time. With the advent of social media, businesses are being told to engage with clients on platforms like Twitter, Facebook, LinkedIn, Pinterest, and YouTube. The thought of logging on to a social media account at least once a day or *gasp* multiple times per day, leaves business owners searching for more time.

There are social media management tools, like Hootsuite, that allow social media users to pre-schedule Facebook posts, Twitter tweets, and LinkedIn updates. However, if the thought of learning an additional social media tool makes your head spin, there is a solution!

Facebook recently introduced the ability to schedule posts – and it’s easy. You have the ability (currently) to schedule Facebook posts up until December 31, 2012 at 11:59pm. Happy 2013 anyone? Once you have scheduled a post, it will appear in y

You’re done! While scheduling posts is a great way to remove some of the burden of social media, you still need to periodically log in to maintain the conversation.

Pinterest is a social media website that allows users to save (or “pin”) images to collections (or “boards”). Users develop pinboards to categorize their pins. For example, a user planning a wedding could have a pinboard for bridesmaid dresses, bouquets, and shoes. The site is particular popular with females; in the United States 83% of users are 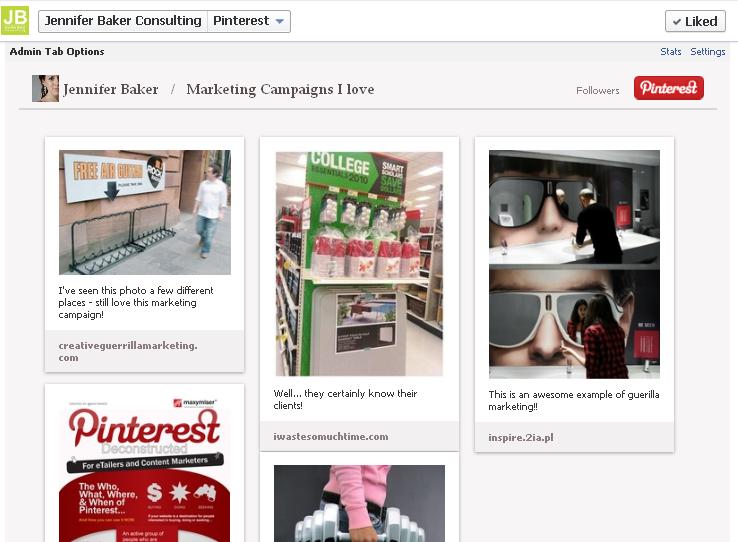 Pinterest started development in December of 2009 and the site launched to a select group of individuals in March 2010. Within 9 months of the initial launch, Pinterest had nearly 10,000 users. The tipping point for Pinterest occurred August 2011 when it was named by Time Magazine in its “50 Best Websites of 2011.”

There is a new application that embeds your Pinterest boards on to your Facebook Page! The Pinterest Page App will display either a single pinboard of your choice, or all your pin boards! This is a great crossover for wedding planners, florists, clothing retailers – the sky is the limit!